I’ve seen it. You’ve seen it. We’ve all been unnerved, angered, surprised, and left with our mouths left wide open from the way some folks treat their kids – especially at “the mall.”

Yesterday, a girlfriend and I went on a Megabus trip to the Harrisburg Mall (which is very nice, by the way) in Harrisburg, Pennsylvania – if you guys haven’t taken advantage of their cheap trips, you really should. For both of us, it cost $4.50 roundtrip, but I digress once again.

Being the observer that I am, I was people watching on a bench while waiting for my girl to come out of a store. I happened to be near two of those little rides that the kids can ride a minute or so for fifty cents. A few kids had already taken their turns when a little girl ran excitedly to get on. There were two older girls with her, but the mother never came near the ride – she went directly into one of the stores. After a time, the two older girls left the area and went to join the mother. The toddler who was no more than three years old stayed where she was, running around, enjoying freedom as a child her age should. Only problem was, I shouldn’t have been the one to watch her actions and make sure she didn’t hurt herself. This went on for a few minutes. From where I sat, I could see inside the store and not once did the mother come to check on the toddler. One of the older girls would peek from the store’s window, but never left to check on the kid either.

As the toddler continued to play by herself, a lone man came on the scene and stood by the railing, looking down on the shoppers below. The toy ride was the only thing separating him from me. I couldn’t see the kid anymore. I got up and walked around the ride to where “happy girl” was. There she stood right next to this male stranger, trying to mimic him as he leaned over the railing. I held my hand out and said, “C’mere, Sweetie.”

Sidebar folks – this is why I don’t believe in and have never taught my kid to “never speak to strangers” – a stranger can save your life or at the very least help. I never taught her to just go and talk to strangers either, but I think you guys feel where I’m coming from.

But, the little girl happily took my hand as I led her into the store that was more important to mom than the whereabouts of her kid. As I handed the babe off, I simply said, “She was running around by herself.” The mother angrily stared at the older child and said, “thank you” to me. As I walked away, I wondered what kind of trouble awaited the older kid. I shook my head.

Now, I was willing to watch the kid free of charge, but the babysitting fee would have raised drastically if I had to run after the child who was snatched by a pervert. Thank God it didn’t end that way, but you never know the intentions of others. 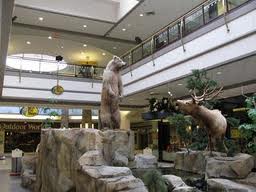 This is an actual photo of the mall I got from the internet. This is what the little girl saw as she was peering down.

Story #2: I was in the fitting room, trying on jeans that didn’t completely cover my little ass (why do designers think everyone wants their cracks showing? How much material does it take to cover a butt as small as mine?) when from another room, someone was berating her child. She was yelling at the kid about how she couldn’t take her anywhere and why she “gotta touch that” and my all time favorite, “I’mma punch you in the face. You took all the beads off my bracelet.” I mean, every sentence was followed by another degrading one.

And my girl heard even more than I did – she said the girl told the little one, “That’s why I’mma leave your ass home next time” and “…always touching something.”

As I exited the fitting room, the bad parent did too – a young girl (not surprising), with the kid who was knee high to the door knob and younger than the one in the first story. I just shook my head. What kid no taller than your knee caps can keep their fidgety hands by their sides and not touch anything? You must have patience to have children, children!

I’m sure you all have seen some of the same mannerisms or worse. How does it make you feel when you witness that type of behavior and have you ever intervened?

Thanks for your feedback.

Posted in Parenting and tagged at the mall, perverts, raising kids, watch your kids. Bookmark the permalink.

If you know me, you are very much aware of how I truly enjoy writing - because after all - it is my thang. If you are unfamiliar with me, welcome to my wonderful word of me. I have one book published, "Office Antics & Sexual Liaisons", and I am actively working on the sequel. I humbly appreciate all who have purchased and read my 1st creation (even if you read it without purchasing, you have entered my mind and got a sense of my writing style). I always welcome all feedback; positive, negative, indifferent - doesn't matter - makes me a better and more conscientious writer - all I ask is that you not be disrespectful. I can be sarcastic, comical, sensitive, informative, and overly descriptive (lol) as I've been told. I'm cool with all that, and to those who are not into my style of prose, I get that too. I still have two other books in my head that should've been on paper a long time ago - what?! - I do have a life y'all! So stay tuned for the sequel, which is tentatively titled, "After the Antics". In the meantime, continue to follow my blog and tell someone about it. I love you for readin' my writin'. Peace!
View all posts by T. Anthony-Horton »
← my appreciation to you
Follow Up to “51 with braces” →