Facebook RSS Feed
← I’m excited!
my appreciation to you →

what is your 12 ft.? (an inspiring story of determination)

What you’re about to read is a real life story of a child’s determination and will power. It’s the stuff that TV movies and Afterschool Specials are made of (do they still make Afterschool Specials? I used to love ’em). But, this is about my kid who beat the odds and overcame her fear of swimming – all to participate in summer camp rowing lessons. Those of you who are my Facebook friends are already familiar with this event, but now you’ll read the entire story and I promise to take you there descriptively. I hope you all stay with me on this and read to the very end or at least in increments.

Last month, the kid (I affectionately refer to her that way in writing) had to take swim lessons to be eligible for rowing camp. On the Saturday before camp began, she had to pass the swim test in order to start camp that Monday. The class was only scheduled for 1/2 hr. The requirements were for her to swim a full lap and tread water for a minute – bam, that’s it!

The Kid getting lessons before hitting the Schuylkill

There were three other girls in her group for the same reason; two of them passed and the other was petrified. I felt bad for the poor thing. Then there was my kid – the girl who wasn’t afraid of water – just couldn’t swim. When we vacationed in Wildwood, NJ, she always went a lit-tle too far in the ocean for me (I’ve since stopped her from doing that – my nerves, y’all). At our 2009 family reunion in Georgia, she innocently jumped into 12 ft. of water with no fear because she saw a cousin do it. She was saved by a lifeguard (and God). I had to fill out paperwork because that was considered “a save.” I never told hubby about it until recently when all this swimming stuff came up.

After the two girls passed the swim test, the coach focused on the kid and the petrified girl. The coach, Joe, was excellent – he worked with them by using paddle boards, foot fins, and a kind demeanor. I was looking at the clock, thinking they didn’t have much time left. “How can she pass the test in this short amount of time?”

When I tell you Joe worked with the kid and fed her with determination, please believe (by this time, hubby was outside on a cigarette break and had gotten really comfortable in a chair). I saw fear and uncertainty in her eyes and realized I had to pull out the real mother in me. It’s hard when you see disappointment in your child’s face. She was on the verge of tears and my heart ached for her because she wanted this so badly. I did what any supportive mother would do – I told her she could do it even though I knew she was afraid. I told her not to give up and “Give it God” and if she gave it all to Him, she’d be okay, and if she was still worried, her faith was not strong enough.

Like an obedient child, she said, “Okay, Mommy.” Then she said, “I want you to walk with me.” Hey, no problem. I walked the length of pool, encouraging her and seeing her come thisclose. The closer she got to 9 ft., the more she panicked. I’m like, “C’mon, baby, you can do this – you’re so close!” She didn’t make it – had to start all over again. I looked at the clock. We were close to an hour when the class was only for thirty minutes. I texted hubby to let him know we weren’t done; he was comfortable in his chair. Concerned about the time, I spoke to the coaches who told me the kid was not going to leave until she passed the test.

She tried a second time and panicked again at 9 ft. I saw her head go under. I’m praying, “Give her confidence, Lord, give her confidence.” I repeated it until I saw her give up. My heart sank… what do I say to my kid? I didn’t know. This is the hard part of parenting – when you’re at a loss for words.

She was on the side of the wall; elbows on top while the rest of her body dangled in the water. She put her head on her arms and cried. Joe went over and gave encouraging words, “You were so close. You can do this! I see that you want it.” I saw it too – sheer determination. My kid had it. I now know what it looks like.

They said, “We’ll give her another try. If she doesn’t make it, we’ll have to schedule more swim lessons.” So, I had to encourage my child and make her feel up to task. How could I do that effectively when I saw defeat in her face and body language? Sigh.

Her third try, she failed again. This time it was shoulder shaking crying. I hung my head low. “Now, what?”

As the kid went to the locker room, I spoke to Nicole, one of the rowing coaches. She and I discussed when and where to take the next swim lessons. It wouldn’t be at Penn Chart; we’d have to go to Sayre in West Philly. I reluctantly told her I’d call and make arrangements.

By the time we were about to leave, Nicole came running to meet us. “We’re gonna give her another chance – if you guys want to….” I looked to my child and asked if she was up to it. I let her make the decision. She said, “Sure, why not.”

This time she had three coaches in her ear. Nicole, Joe, and the other girl (I regret not getting her name) who was the real cheerleader. When I tell you those swim teachers and coaches would not let her leave until she passed, you gotta believe me! The cheerleader told my kid that she could see how much this meant to her and how badly she wanted it. She noted that when the kid panicked it was always in 9 ft., “when you’re so close to finishing.” She told her what to do when she panicked and how close 12 ft. is from 9 ft. She told her what to do when her feet went down and she felt the water getting deeper (all things I couldn’t). She gave her the real pep talk. I wish I knew her name!

After that, was the moment of truth. My girl got in 5 ft. I winked and told her, “You got this.”

On her last try, Joe swam in the lane next to her while the pep talker walked the 5 ft. to 12 ft., encouraging the kid as she swam the distance. It was truly something to see. I only wish I had recorded it.

Once she touched the wall at 12 ft., this momma here was jumping & shouting! Yes, y’all – I’m that mother! She told me all she heard was my mouth when she lifted her head from the water. My girl touched the wall at 12 ft.! When she got out of that pool and hugged me in all her wetness, it was thee best feeling ever. She did it! She shed tears of joy instead of tears of disappointment. Thank you, Jesus! And know this – because of the teachers’ dedication at Penn Charter, my kid learned how to swim! When she got there that morn, she did not know how to swim and couldn’t tread water either, but by 2:00 (yes, we were there for a little over three hours), she swam an entire lap, treaded and did some form of a breast stroke! Breast stroke? Who knew! All in the same morning, my kid went from nervousness, uncertainty and disappointment to elation & pride! God is truly awesome & works wonders!

I still get goose bumps when I think about it and write about it. When she tells her version, she just says, “I passed.” I shake my head at her nonchalance. This is truly a story of a child’s determination and will power. Heck, I’ve seen movies based on a lot less. I expect to get a call from the ladies of The View or at least be recognized for sharing. I kid you not – that’s my 12 ft., and now you understand exactly what the title of this blog means. My kid is an inspiration to me. And you know what? She can never ever say what she can’t do. She set the bar high for herself – poor thing don’t even know what she’s got in store for herself. I don’t know if she can still swim at this point, but like she said, “I can get to the edge or tread until somebody reaches me,” and that’s what she needs for rowing. 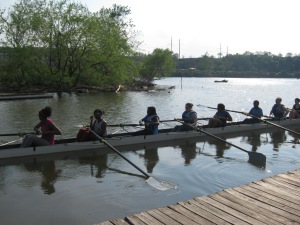 The Kid is 3rd from the left

So, when your kid tells you, “I can’t!” – don’t believe that shit. Push them without breaking their spirit.

Thank you for taking the time to read this blog! I appreciate all of you! Me whispering, “now, go tell someone.”

If you know me, you are very much aware of how I truly enjoy writing - because after all - it is my thang. If you are unfamiliar with me, welcome to my wonderful word of me. I have one book published, "Office Antics & Sexual Liaisons", and I am actively working on the sequel. I humbly appreciate all who have purchased and read my 1st creation (even if you read it without purchasing, you have entered my mind and got a sense of my writing style). I always welcome all feedback; positive, negative, indifferent - doesn't matter - makes me a better and more conscientious writer - all I ask is that you not be disrespectful. I can be sarcastic, comical, sensitive, informative, and overly descriptive (lol) as I've been told. I'm cool with all that, and to those who are not into my style of prose, I get that too. I still have two other books in my head that should've been on paper a long time ago - what?! - I do have a life y'all! So stay tuned for the sequel, which is tentatively titled, "After the Antics". In the meantime, continue to follow my blog and tell someone about it. I love you for readin' my writin'. Peace!
View all posts by T. Anthony-Horton »
← I’m excited!
my appreciation to you →